Thanks to the new healthcare reform law, the insurance industry is undergoing a big transformation. The federal government is now requiring insurers to open the coverage gates, remove the benefit caps, and reduce cost-sharing amounts for policyholders.

You've probably already heard about some of the changes launched, and scheduled to launch:

These insurance industry reforms are only the beginning. When mandated individual coverage takes effect in 2014, it will bring with it several additional changes to private health insurance that will likely affect your coverage in one way or another. Here's how:

Most of the Medicaid changes outlined in the healthcare reform law center around cost containment and rewarding doctors and hospitals that provide quality care to Medicaid beneficiaries. However, in 2014, a landmark change in the 45-year-old program is slated to take effect: All adults under age 65 who meet certain income guidelines will be eligible to enroll in Medicaid. (Some states instituted the new Medicaid enrollment guidelines early.

new law opens up the program to also include adults without children and pregnant women. Enrollees will still have to meet certain income guidelines. Specifically, household incomes won't be able to exceed 133 percent of the federal poverty level (FPL). FPL is $10,830 for an individual and $22,050 for a family of four.

Some parts of the Affordable Care Act have already been implemented. However, several of the more groundbreaking provisions of the healthcare law- some of which will affect the greatest number of Americans­ won't go into effect until2014. In the interim, federal and state officials are working with leaders in the health and insurance industries to restructure our nation's healthcare system.

Healthcare reform mandates coverage for most

If you don't have coverage and you're not in one of the groups that is an exception to the rule, you'll pay a penalty. You may not be required to purchase health insurance if you

If you're penalized, the amount you'll be fined will go up each year for the first three years. In 2014, you'll pay $95 or 1 percent of your taxable income, whichever is greater. In 2015, the fine will be $325 or 2 percent of taxable income, and in 2016 the penalty will be $695 or 2.5 percent of income. Each year after 2016, the government will refigure the fine based on a cost-of-living adjustment.

To help you meet the cost of mandated insurance, the government will offer premium credits and cost sharing subsidies if you and your family meet certain income guidelines and if you enroll in one of the new state-run insurance exchanges.

If your income falls between 133 and 400 percent of the federal poverty level (FPL), you could receive premium credits that will lower the maximum amount of premium you have to pay for your coverage.

Whether you're an individual or a small business owner, these exchanges are supposed to serve as an easy, cost­ affordable way for you to get health-insurance for yourself or your employees.

From a consumer perspective, the exchanges are about power in numbers. For instance, the American Health Benefit Exchanges are supposed to provide access to lower cost insurance plans for the uninsured because they allow individuals to join together to create a large pool of insured people. Usually, in the insurance world, the more people who are insured under any one plan, the lower the premiums for that plan.

The SHOP exchanges are where business owners with fewer than 100 employees can join forces with other small businesses to try and get the best coverage at the best price for themselves and their workers.

Both the individual and small business exchanges are supposed to give you access to plans that have four tiers of benefits: bronze, silver, gold, or platinum. There will also be a catastrophic plan for people under 30 and for those who are exempt from mandated coverage.

States don't have to set up the exchanges. If a state chooses not to, the federal government can come in and create them.

On November 6, 2012, Missouri voters passed a ballot measure blocking Governor Jay Nixon (D) from establishing an exchange via Executive Order.1 Legislation establishing a state-based health insurance exchange failed in both the 2012 and 2011 legislative sessions. While the Governor initially supported running a state-based exchange, he announced the state would default to a federal exchange in 2014.

The exchange will offer 4 levels of coverage

Exchange plans will be offered in a tiered format named after metals: bronze, silver, gold and platinum. Bronze plans will have the lowest monthly premium, but will also have higher deductibles and cost sharing provisions(co-pays).

All plans will include "essential health benefits" as defined by the health care reform law. Specifically, the plans include items and services from at least these 10 categories of care:

Exchange plans are tiered to provide the following percentage of coverage:

How Healthcare Reform Affects You

Healthcare reform (what some refer to as "Obamacare") is now the law of the land. The legislation means the American health system is undergoing an overhaul the size of which hasn't been seen since Medicare and Medicaid were created in 1965. The law calls for insurance industry reforms, mandates healthcare coverage for most Americans, creates more insurance options, and expands Medicaid.

Although the broadest of the bill's provisions won't take effect until2014, Americans may have already noticed some changes starting in 2010. Here's a look at the new healthcare reforms already in place. 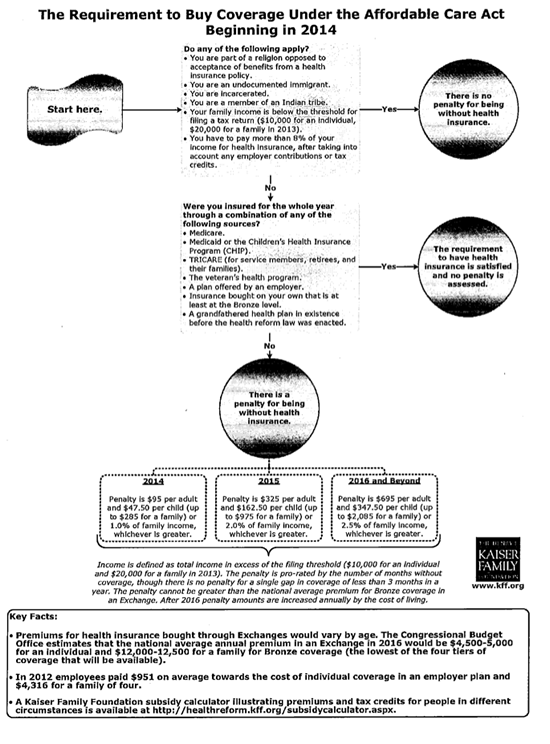 Many employers face penalties if they don't offer health insurance

By 2014, the only businesses not at risk for being penalized if they don't offer health insurance to their employees are businesses with 50 employees or less.

The Affordable Care Act does not require businesses to provide health benefits to their workers, but larger employers face penalties starting if they don't make affordable coverage available. Enforcement of those penalties will begin in 2015, a year later than originally scheduled. This simple flowchart illustrates how those employer responsibilities work.